How to develop a successful team culture within your grassroots team.

Often when working with volunteer coaches you hear of the problems and frustrations they encounter when running junior teams, especially in relation to parents and players. Many coaches have experienced situations such as parents questioning selection, judging everything on winning and losing rather than development and shouting negative instructions from the sideline, which undermines the coaches’ work. As well as players not being punctual and positive with other team members and of course not paying proper attention during practice sessions. (I must 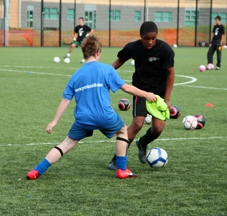 stress here I am only concentrating on the negatives I’ve heard – there are also loads of positives that coaches give out as well!)

The solution to these problems and frustrations can begin before any coaching takes place – at the beginning of the season. It is vital for every grass roots coach (or professional for that matter) to set a team culture.

Especially at grass roots level, its important that every player AND every parent knows the way the squad will operate and what is expected of everybody involved. Coaching and playing is obviously the top priority but setting the right standards from the first day of the season enables maximum effectiveness and support to the coaching process.

Before any training takes place call a meeting with parents, players and fellow team coaches to discuss the details of the culture you wish to develop. This includes everything from punctuality, dress code for training, communication expectancy with players etc

Here are some of the key elements I believe are crucial to building a team culture:

1. Team attitude
“In this team we do things differently and well”
The player’s attitude to training and playing needs to be outlined and clear rules established. Support and respect for each other as players, for the coaches, opponents, volunteer referees and club organisers is vital.

2. Parents as part of the team
”In this team the parents are part of coaching the set up”
It is important for parents to understand the selection process, training and playing policy. ‘Buy in’ of that policy will make them ‘allies instead of enemies’. Outline how they can help and work with their kids to enhance the work done by the coach. Prioritise how to coach their kids using one to one coaching methods, educate them on what are the qualities great players and great teams. Illustrates how to watch the game positively, how to talk about performance to your child, and finally diet, nutrition and lifestyle.

(At PREMIER SKILLS we have designed a course ‘Parent as First Coach’ course for this exact purpose.)

3. Playing style
“In this team we don’t settle for ordinary”
Before any coaching takes place introduce and clarify with the parents and players the proposed playing style.

“Before going in to battle all soldiers (players) should know how the battle (game) is to be fought as a group (team) and the individual’s responsibilities to the group (team).”
Field Marshall Montgomery

A clever coaching tool is to use a mini-handball session as a ‘moving blackboard’ where in the warm up the players play with their hands, not their feet, on a mini pitch so the coach can outline the playing philosophy and the players can see and understand the foundation of team shape and basic tactical awareness required.

It is important that both players and parents know and understand what the team is working towards.

4. Preparation
“In this team we play in a different way and every player understands their role”
Prepare every session and make sure everything – balls, bibs and cones etc – are set up before the players arrive. Make sure the players are catered for within the theme of the session from the moment they arrive for training with no players aimlessly kicking the balls around. Don’t waste time in practice with meaningless drills and warm ups that just take up time.

Programme your work, only moving on when you have assessed the players are successful and competent at the level you have been coaching to. Push the players to talk and communicate as part of their understanding. This is the hidden skill that supports every other skill they have.

5. Communication
”We develop intelligent players with a playing personality”
When delivering team talks be organised and motivated. Aim to talk impressively, use words and phrases that deliver positive images (this is very important when coaching as well – “keep the ball” is a better than shouting “don’t lose the ball”.

Take time to prepare for team talks develop a beginning, middle and end using easily recognisable images and pictures that re enforce the understanding of the game style and standards you require in practising and playing.

At the end of session after the team de-brief try to have a 20 second conversation with every player to give ’sandwich’ feedback ie “Well done today you showed good vision when checking your shoulder. For your football homework I want you to practice receiving and opening out with both feet it will really add to your game. However, you practised really well this evening well done.”

Giving homework targets is very important in helping the player and parent develop the players game.

6. Reinforce the culture
“In this team winning isn’t everything – winning with style is everything – that’s our culture”
Make players proud of being part of the set up. Emphasise morale, spirit, persistence and character to train and play competitively but with style. Develop team slogans that reinforce the belief and pride in the culture you’ve set up.

As thinking coaches you will probably add to these key elements I’ve discussed. I’m interested to learn the new aspects you can offer – would love to hear your thoughts in the comments box below.

Roger Wilkinson
Co-founder of PREMIER SKILLS, Roger has over 35 years football coaching experience. Roger has worked at Crystal Palace and West Bromwich Albion, coached internationally with the New Zealand under 17 and 20 teams and is a former director of coaching for the New Zealand Football Association. He is also the author of a series of best selling youth coaching DVDs. Roger is a former player with Luton Town and Stevenage Town.

17 thoughts on “Building your team culture”