I cringe when I see coaches who work with young players using one and two touch passing practices. Passing of this type requires the special skills of awareness and touch that only come after basic football qualities have been mastered. The progression towards high playing standards should follow a carefully planned route with each stage establishing the skills and tactical needs of the game as they become necessary. Young babies are fed milk and soft substances that concur with their age and digestive ability and solids are introduced gradually as the child develops. Our ‘football babies’ however, are fed unsuitable ‘meals’ too soon causing ‘football indigestion’ that remains with them throughout their whole football life. 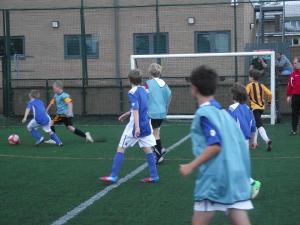 One and two touch football is an art in itself. Top players and teams’ need to use passing of this type extensively due to tight marking and space denial that occurs in games at senior competitive levels. The use of ‘early’ passing as one and two touch is, demands both quick awareness allied to fast decisions and a calculated heavy or soft touch on the ball to produce the required end product.

‘Playing in the future’ is a phrase I use to explain early recognition of game situations; ‘touch on the ball’ is about adjusting passing speeds to suit the situation at hand. The ability of players’ who, finding themselves in tight situations, are able to make quick decisions resulting in fast movements whilst controlling ball speeds and passing accuracy, requires top-class playing skills and these can only be accrued over time with correct development methods.

The complexity of ‘early’ passing must not be disregarded and young players must have acquired both self-confidence when on the ball and a sound football intellect prior to the introduction of one and two touch practises. These practises must involve a gradual denial of practice space in conjunction with active opposition to create the same situations and speeds that occur in match play at senior competitive levels.  Recognition of – if and when – to play ‘early’ passes are the guide-line decisions, these are followed by the – what and how. Young players must be ‘engulfed’ in this type of practice at an age and ability where they can learn to answer the questions and solve the problems that the game at the higher playing levels begins to ask.

I have always been concerned and bemused with the use of practises that ‘force’ players to make pre-ordained actions; one touch only or two touch only etc. The game of football is about decision making; the more correct decisions made means a better performance; the game also demands that decisions must be quickly changed if necessary and practises that do not relate to realistic game situations diminish playing ability rather than enhance it.

We must abandon old coaching methods that continue delivering ‘produced mediocrity’ to our game and look for more ambitious and forward-thinking ways to produce ‘natural, all-round’ players to pull the game here out of the ‘doldrums’ of poor playing standards we suffer watching today. The persistent and inexplicable mis-use of development here in which, ‘ham. egg, chips, two slices and a cup of tea’ represents the thoughtless football ‘intake’ given to our young players,  leads on directly to the unfulfilling ‘milk and rusks’ football meal  served up by older age groups in parks to stadiums all over the country.

Will we ever see ‘a la carte’ quality football here? Not whilst we continue to recognize rubbish as greatness – Cold soup or PATE DE FOIE-GRAS WITH TRUFFELS ……. The choice is yours.

26 thoughts on “One and Two Touch Passing.”